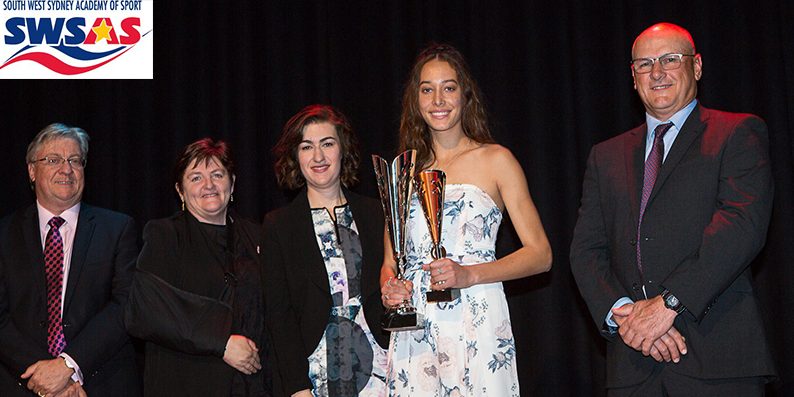 A sell-out crowd of over 500 guests, including some of Australia’s finest athletes, sports supremo’s, politicians and local government administrators sat amazed, as story after story of the achievements of the south west Sydney region’s most talented young athletes.

The presentation dinner was an inspirational experience of past sporting glories and messages from a ‘who’s-who’ of Australia’s finest national and international heroes. The evening simply brought together all things ‘good’ in Australian sport.

These local sporting greats were in high demand for photographs and autographs by the Academy’s future stars and not so young supporters.

Academy chairperson Mr. Peter Campbell spoke with passion about the importance and value of the Academy to our region and congratulated its 300 plus athletes and over 50 volunteer coaches and support staff, as well as the hundreds of supportive parents associated with the Academy.

Throughout the room local politicians representing the three tiers of Australian government also expounded the virtues of the Academy and its amazing local athletes, whilst individually re-affirming their support for the Academy’s future.

In front of a packed house, it’s long-serving Executive Director Gerry Knights was glowing with pride in the achievements of so many amazing Academy athletes.

But, none shone more brightly than the winner of this year’s ‘athlete of the year’ award winner, Camden’s 14-year-old athletics track and field sensation Nakeisha Brimble.

Knights said, “this year’s award was again a very difficult decision, with so many athletes representing at the state, national and international level, across 17 varied sports programs.”

Being a top athlete, is only one part of being a holistic athlete as far as the Academy award selection panel is concerned.

The panel looks for those special athletes that possess the defining personal qualities of a positive attitude, total commitment to task, leadership, respect and responsibility, and a commitment to community.

He was also quick to mention, the partnership with these fine organisations and the inclusion of additional quality businesses is paramount to the sustainability and growth of its local Academy.

Netball NSW CEO Carolyn Campbell and Hockey CEO David Thompson expressed their pride in the achievements of the regions young athletes and congratulated all associated with the Academy’s amazing growth over recent years.

Dr. Phil Hamdorf Executive Director, Sport Development Group at the NSW Office of Sport is quoted as saying, “the Graduation Dinner gave me a good appreciation of the significance and role of Regional Academies, in the community and in the development of tomorrow’s sports stars.”