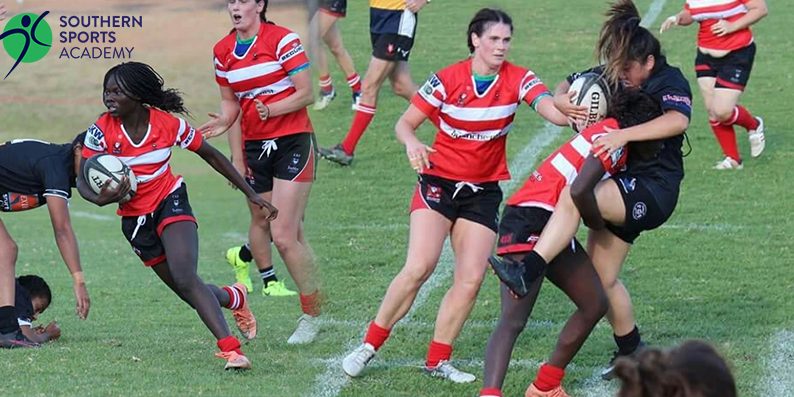 Southern Sports Academy (SSA) Total Ag Solutions rugby squad member Biola Dawa has had a big month, and it doesn’t look like slowing down after being selected to represent University of Canberra in the 2018 Aon Uni 7’s. Biola plays in the Southern Inland Rugby Women’s 7’s competition with local club CSU Reddies, and a painful premiership drought was put to rest in August with Biola’s CSU clinching a 26-17 grand final win over Griffith.

Fronting up for their third grand final in four years, the Reddies confronted their decider demons face-to-face, ousting the minor premiers with a clinical display of sevens rugby with Biola crossing for a try in the decider.

At 17 years of age Biola has played rugby for two years after transitioning from AFL and has recently been selected for University of Canberra Women’s 7’s squad to play in the upcoming 2018 Aon Uni 7’s Series.

Biola was rewarded after a stellar season on the field with CSU, and a steely determination in the gym and during skills sessions with the SSA Total Ag Solutions rugby squad.

In its second year, the newly-expanded tournament will feature 10 universities from around Australia in a five-leg series. Teams will play in a carnival every second weekend in various cities including Tasmania, Brisbane, Gold Coast, Adelaide, Canberra and Sydney.

Coach David Grimmons said he felt UC would pack a bigger punch across the park in the second year of the competition. “We’ve selected a squad that will challenge for honours,” Grimmons said. “Almost half the girls who played last year are back again and they’re stronger with that experience under their belts.”

“There’s a lot of new talent in the mix, too, which has made us stronger and more versatile. We’ve gained players from a variety of other sports who have made the transition to sevens very smoothly. We had a lot of women interested in playing this year which shows how popular this form of the game is. It’s a great sign for rugby, but it did give us a few selection headaches. We’ve settled on a squad of 25 and are hard at work preparing for another tilt at the title.”

University of Canberra played their first carnival in Tasmania on August 25-26th.